Empires provides an alternative look on the events depicted in Samurai Warriors 4, using the historical landscape as a setting for an exciting strategy-focused game. Players have the opportunity to create their own character and set up a game that starts them off in the lower ranks of the army and allows them to gradually progress to rule the entire land through their conquests. Features: Get the very best from your officers with the intuitive yet detailed political command system! Station each officer in the 3D virtual castle, and watch as they communicate with each other and with their daimyo. Use the intuitive interface to execute political policies. The Politics phase of this title revolves around appointing your subordinate officers as Magistrates, each in charge of a specific function, such as Development or Military. These Magistrates then provide their Daimyo with policy suggestions, and it is the player’s task to select which of these policies to employ. Naturally, you can also use your own, personally selected policies as well. The Politics screen allows you to view each officer stationed in the 3D virtual castle, allowing for an intuitive yet detailed political command system. Use all of your officers to claim victory! Increased controllability places greater importance on team battle tactics! Supply line battles and the ability to issue individual orders to all officers return! Character switching can also be undertaken between characters who have developed a deep bond through relations at the castle or on the battlefield. This title sees the return of the acclaimed battle system from SAMURAI WARRIORS 2 Empires, in which bases are joined together by supply lines, necessitating a strategic pushing up of the front lines in order to dominate the field of battle. Additionally, due to popular demand, you can now issue individual orders to customize the behavior of each officer. A maximum of eight officers can be taken into battle, and by deepening relationships between officers, the player can freely switch between these characters. The ability to switch between as many as eight playable characters allows for greater variety and strategic depth in battle. Experience the constantly changing human drama. Dramatic interactions between characters are depicted, with a focus on historical episodes and developing human relations. Your decisions will greatly affect the development of friendships and rivalries among your officers. This title focuses on the dramatic interactions between the various characters of the age. Events are played which are based on both historical tales and on the developing in-game relationships between the characters. Friendships and rivalries among allies, as well as developing antagonisms with enemy officers develop throughout the course of the game, affecting event scenes, in-battle objectives, and playable characters. History-based events have been prepared for all, including hypothetical versions of famous events such as the nightingale poem. Custom characters and minor characters can also make their marks! Not only famous officers and custom officers, but more obscure officers, including women, have a chance to be at the center of historical drama. User-created custom characters have always been at the center of the Empires titles, but over 100 well-known officers (not traditionally playable characters) have also been given their own unique appearance and statistics. In an additional first for the series, over 100 female characters have also been given individual appearances and statistics. Naturally, all of these characters can and will appear in the dramatic interpersonal cut-scenes, adding new variety and excitement to the gameplay. Modes: Conquest Mode – The game’s primary mode. Select a starting scenario and clan, and aim to clear the set goals. Genesis Mode – The player is free to edit scenarios to fit their own specifications, and play their own version of the game. Edit Mode – Create custom characters and use them to replace existing historical characters on the roster. Vault – Visit the Archives, in which events can be played featuring a vast array of different character groupings, listen to music or read the officer biographies. Settings – Change settings and manage data. Downloads – Download additional content. Click Images to Enlarge 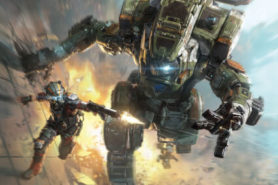 Titanfall 2 (Code in a box)